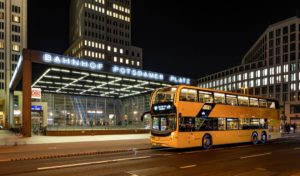 ADL has delivered the first series-production Enviro500 buses to public transport company Berliner Verkehrsbetriebe (BVG) of Berlin, as part of a programme which will see 200 of the manufacturer’s double deckers in the German capital.

Berliner Verkehrsbetriebe (BVG) signed a multi-year framework contract with ADL subsidiary Alexander Dennis Germany GmbH as the supplier of its next generation of double-deck buses in 2018. It placed its main order in March 2021 following a successful testing programme, with two pre-series vehicles delivered in the previous year.

Production has now increased at ADL’s factory in Scarborough, England to deliver up to five buses per week for most of 2022.

ADL has recruited an experienced local team and invested in office space, a workshop and parts warehouse in Berlin to facilitate its deliveries and support the vehicles in service.

The Enviro500 for BVG are 13.8 metres long and 4.06 metres tall, carrying up to 112 passengers and 80 seats. Small modifications were made following BVG’s experience with the pre-series vehicles, but the concept retains three doors and two staircases for rapid boarding and alighting on busy urban services.

Paul Davies, ADL President and Managing Director, said: “Our global experience as the world’s leading manufacturer of double-deck buses has allowed us to develop a vehicle that respects local traditions and requirements, while reducing energy use through our durable yet lightweight construction.

“We look forward to seeing our fleet grow over the next year as all 200 new Enviro500 buses enter service in Berlin.”