When will we see the Tevva Truck on UK roads? Tevva is propelling Britain’s electric truck revolution. The first orders expected to be delivered in Q3 later this year. By 2023, the company expects more than 2,000 trucks per annum will be produced at Tevva’s UK facility – creating up to 1,000 skilled jobs. Tevva has had trucks on UK roads since 2016, operating in two cities and covering more than 400,000km of customer duty cycles. During this time, Tevva has collected hundreds of thousands of data points and learnings – which has helped drive the engineering design and development of the latest Tevva Truck.

Tell us about the technical specification of the Tevva? The 7.5t battery electric vehicle (BEV) range is 250km, and has a 110kwh battery capacity, and a 4.815 wheelbase. It also has capacity for least 15 Euro-pallets, a body and a payload allowance of approximately 3,400kg, and with left and right-hand drive options. The vehicle range increases up to 500km with the patented range extender (REX) model through the combination of battery and hydrogen fuel cell technologies. The Tevva Truck 7.5-tonne model is the first in a range of electric trucks to be manufactured by Tevva in the UK. The truck manufacturer will produce both BEV and fuel cell REX models, between 7.5 and 19 tonnes GVW for the UK, European, North America and Rest of World markets.

What sector of the market is the Tevva aimed at? The Tevva Truck is aimed at the medium and heavy-duty truck market, or those up to 19 tonnes GVW, who want a zero-emission solution for urban and last mile deliveries. The truck will come with multiple body options and meet a wide range of duty cycles.

Tell us about Tevva’s manufacturing site in Tilbury?Tilbury is the perfect location for Tevva’s first manufacturing base. The brand-new manufacturing facility borders the London Thames Freeport area and provides close proximity to central London and Europe. The 11,000m sq manufacturing plant, which is slightly bigger than the area inside an Olympic running track, is set to create an additional 1,000 skilled mechanical, software, engineering, and manufacturing jobs in the next 24 months. Tevva’s agile manufacturing production system takes inspiration from leading British automotive best practice – an approach that will deliver volume series production whilst ensuring a localised labour force and supply chain. The low capex methodology has multiple benefits, including rapid scalability and replicability, which will support Tevva in responding to local demand for zero emission trucks across global markets – and thus accelerate electrification in commercial vehicles. 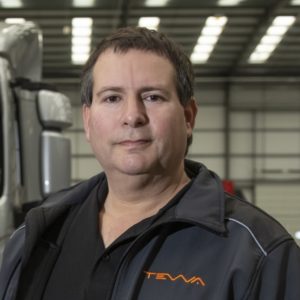